Young soccer players are given hands-on training by renowned athletes Brian Ching, Stuart Holden, and Landon Donovan. Students will leave our camps with new techniques and an unforgettable experience designed to build character on and off the field.

Steer Life By The Helm

With the guidance of professional athletes, our mission is to enhance the lives of America's youth by maximizing their soccer potential and giving back to local and national charities. Through passion, humility, and love, we provide children the opportunity to grow as athletes and human beings.

Soccer is an extremely physically demanding sport. You cannot perform at your best when your body is not prepared in every way. We touch on all the aspects required to make you your best, including strengthening, conditioning, nutrition, etc.

This is a vital stage in a soccer player’s development. We feel we are uniquely qualified, as professional athletes, to provide players with the best training they can get.

We believe mental awareness is the most underrated part of sports in America. We have dealt with ups and downs throughout our careers; our ability to manage them responsibly has helped us be successful. Too many young athletes are missing out on this part of their development. 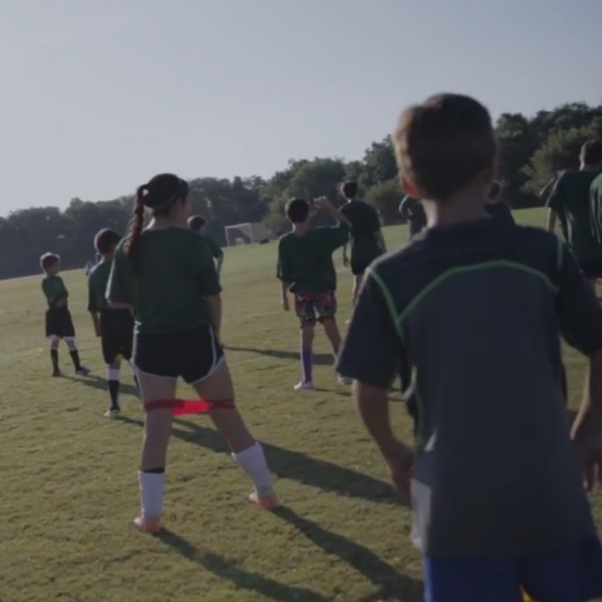 We have a sports performance trainer on hand to provide expert training to the young athletes. The training incorporates injury prevention to instill good habits and core strength into the players.

Brian Ching (born May 24, 1978) is the managing director of the Houston Dash. Ching played professional soccer for thirteen years, twelve of which were in Major League Soccer. He also represented the U.S. national team for eight years.

Ching's professional career began when he was the 16th pick overall by the Los Angeles Galaxy in the 2001 MLS SuperDraft, making him the first Gonzaga player and the first player from his native Hawaii selected in the MLS draft. After winning the U.S. Open Cup with Los Angeles, Ching was released from the team and played with the second division Seattle Sounders. He returned to first division soccer when the San Jose Earthquakes acquired him in the 2003 MLS Supplemental Draft. He won an MLS Cup and Supporters' Shield with the Earthquakes, collected the MLS Comeback Player of the Year Award, the MLS Golden Boot, and was named to the MLS Best XI.

In 2006, Ching relocated to Houston when the Earthquakes team became the Houston Dynamo. He led the team to back-to-back MLS Cup Championships in 2006 and 2007 and four MLS finals overall. A six-time MLS All-Star, Ching retired from professional soccer in 2013 as Houston Dynamo’s all-time leading scorer.

Ching made his international debut May 26, 2003, becoming the first Hawaiian-born player to represent the United States. Ching scored his first international goal, an equalizer in the 88th minute, in a World Cup qualifier 1-1 tie against Jamaica in Kingston on August 18, 2004. He became the first Hawaiian to be named to the U.S. roster for the 2006 FIFA World Cup. He helped the US team win the 2007 Gold Cup. On May 11, 2010, Ching was named to the preliminary U.S. men's squad for the 2010 FIFA World Cup in South Africa.

Off the field, Brian is a pillar in the Houston community where he partnered with Habitat for Humanity to build three homes for underprivileged families in the Houston area through fundraising efforts under his program "The House that Ching Built”. He now currently has accepted a seat on the board for Houston Habitat where he continues to help the community in which he played.

Another one of his initiatives is Ching’s Champions in partnership with Kroger. This would honor people from the community that continuously give selflessly of themselves in the service of others. Each year winners would get a 250 second shopping spree.

Along with these initiatives Brian constantly donates his time to other charitable causes like Recipe for Success, Celebration of Champions for Texas Children’s Hospital, Girls Inc., Houston’s Children’s Charity, Dynamo Charities, and others. He constantly enjoys giving his time and voice for the betterment of the community around him. 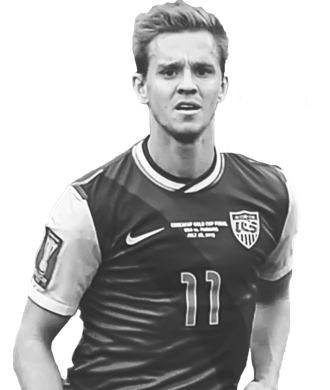 Stuart Alistair Holden (born August 1st, 1985) is a USA International and most recently a member of Bolton Wanderers in England. He has represented his country 25 times scoring 3 goals.

Holden made a name for himself in the U.S. youth ranks before earning his first call-up to the full national team in 2008. He represented the United States in the 2008 Beijing Olympics and scored the opening goal in a 1-0 win vs Japan. In the 2009 CONCACAF Gold Cup, he was selected to the Gold Cup All-Tournament Team.

Holden was a part of the 23-man roster for the U.S. National Team during the 2010 World Cup in South Africa and played as a substitute in the opening 1–1 draw with England. Despite being hampered by several serious injuries, Holden made his return to the U.S. Men’s National Team for the 2013 CONCACAF Gold Cup. He played in the final, with the U.S. taking the title, but it was later revealed that Holden had suffered a torn ACL in his knee.

On the club level, Holden played with top clubs in the Barclays Premier League, beginning with Sunderland in 2005. He returned home to play for the Houston Dynamo in Major League Soccer on January 1st, 2006. He led the team to back-to-back MLS Cup Championships in 2006 and 2007, scoring a penalty in the 2006 Final. An MLS All-Star and MLS Best XI in 2009, Holden moved to England to play for Bolton Wanderers on January 1st, 2010. He made several appearances with the club leading them to a seventh-place finish in 2011 and the FA Cup semifinals. In his first season at Bolton Wanderers, Holden was voted by “The Guardian” readers as the best player in the premier league at the halfway point.

Born in Aberdeen, Scotland and raised in Texas, Holden played two seasons of college soccer at Clemson University before moving across the pond. He is marrying Fiance, Karalyn West, on June 7th. His mother, Moira is a realtor in the Houston area, brother Euan, a former professional soccer player and sister Rachel, a TCU Grad currently working for Better Homes & Garden Gary Greene.

Off the field, Holden founded Holden’s Heroes in 2006, a charity dedicated to bettering the lives of children with cancer. He partnered with Texas Children’s Hospital, making regular visits with the children and hosted a large number of fundraisers for them and their families. 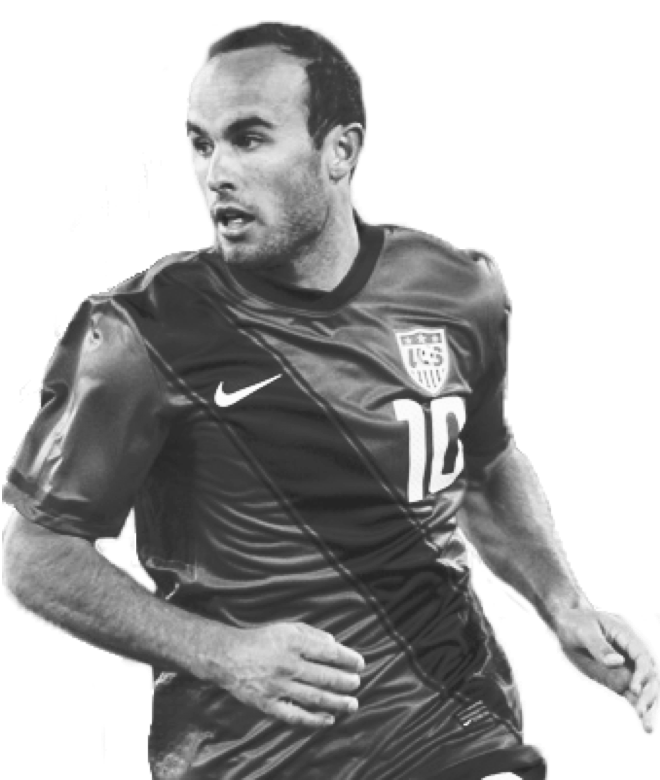 Landon Timothy Donovan (born March 4, 1982) is a retired professional soccer player. His career spanned 16 years and he played over 500 total games in Major League Soccer for the San Jose Earthquakes and LA Galaxy, in Germany for Bayer Leverkusen and Bayern Munich, and in England for Everton FC. He also appeared 157 times for the US Men's National Team in addition to playing for the U-17, U-20, and Olympic National Teams. Landon is the all-time leader in goals and assists for the US Men's National Team as well as the all-time leader in goals and assists in Major League Soccer. He participated in the 2000 Sydney Olympics and played in 3 World Cups. He is a 6-time MLS Cup Champion and considered the best soccer player America has ever produced.

Off the field, Landon enjoys traveling and spending time with his wife Hannah, his family, and his dogs. Landon is also very involved in the community, working closely with the LA Galaxy Foundation on its educational, health, and soccer based initiatives and programs. Through the foundation, Landon has visited Children’s Hospital Los Angeles numerous times, served Thanksgiving meals to children and families in need, and participated in holiday gift giveaways for underprivileged children. Separate from his work with the LA Galaxy Foundation, Landon has participated in countless charitable endeavors. He lent his name and his voice to the United Against Malaria Campaign to raise global awareness and renew worldwide commitment to ending malaria, as well as increase the use of prevention tools and malaria treatment in Africa. Landon participated in the popular television show “Extreme Makeover: Home Edition,” filming a special message of support and encouragement to a family whose living conditions had caused their health to dramatically deteriorate. Landon has also served as a spokesperson for Kids 4 Kids, a charity that supports the Children’s Cancer Research Fund. Finally, Landon works extremely closely with the Make-A-Wish Foundation and, to date, has granted more than a dozen wishes for children with life-threatening illnesses.

SHOULD WE COME TO YOUR CITY?

We’re passionate about giving back to the communities we visit. We partner with local and national charities that user soccer as a way to support children in their communities. During our visits to Austin and San Diego, we were given the opportunity to work with three great charities who help give underprivileged children access to better clubs, acting as a catalyst for social and academic development.

THANK YOU TO OUR SPONSORS

HELM DAY, EVERY DAY. BE A PART OF THE CLUB.

How Can We Help You?